The Tee-Fore-Two is a three-day, 54-hole Stroke Play championship with the first-round format being FourBall.  The second round, Chapman Alternate Shot, is typically known as “moving day” and is well known for some of the craziest stories of doom and destruction as well as exceptional play.  If partners Ruth Foster and Bev Probasco were still with us they would cry laughing at their 1998 starting-hole score of 18 on the par-4 Hole #18 at Highlands Golf & Super Club (north of Hutchinson) where they alternated nine shots from the same Yucca plant in extreme rough just forward and left of the teeing ground AND a 3-putt to top it off.  A final-round two-lady Scramble format concludes the championship.  For the first 30-35 years the Tee-Fore-Two was also known for some very clever and sometimes risqué team costumes that mirrored host-golf course tournament themes, but in more recent years teammates have opted for matching golf outfits.

Through its history the Tee-Fore-Two has been hosted by a variety of public/municipal as well as country club courses throughout Kansas from Pittsburg’s Crestwood CC in the southeast corner of the state to Goodland’s Sugar Hills GC in the northwest corner of the state and everywhere in between.  Public Course Carey Park GC hosted four times—1968, 1994, 2003 and 2012 as did Crestwood CC—1985, 1993,1999, and 2008.  Salina CC, Manhattan CC and Shawnee CC (Topeka) have hosted three times each.  Lawrence CC is the host for the 2017 Tee-Fore-Two and previously hosted in 1977, 1995 and 2007.

The 2016 defending Low Net Champions are Shelley McCalla and Beth Kuckelman from Topeka while the Low Gross Champions are Nicole Buery/Daniela Ruggles Duran from Wichita.  Tee-Fore-Two has produced some impressive runs by Low Gross Champions over the years.  Nicole Buery has won the Low Gross Championship four times with three different partners—stepmom Alex Buery 2013 and 2012 as well as Paula Routon in 2011 to go with her 2016 win with Daniela.  Alex Buery won 4 times (2012 and 2013 with Nicole and 2002 and 2004 with Barb Taber).  Barb Taber also won 4 times--two more wins came with partner Barbara Ford-Buell in 1998 and 1999.  However, the most wins came from KWGA past-president Natasha Fife and Ruthie Parker--Low Gross Grand Champions 5 consecutive years—1986, 1987, 1988, 1989 and 1990.  Speaking of KWGA presidents past and present—Judy Weber Morris won in 1994 with daughter Kathy Weber; Denise Desilet won in 2006 and 2007 with Penny Hickman, current president Jayne Clarke won in 2005 and 2015 with Terri Albers; and Karen Exon won in 1997 with Stacy Manis and with Cindy Cooper in 2000 and 2014.  Oddly enough one competitor, MaryLee Evans, has won both championships--Low Gross in 2010 with Sidney Garrett and Low Net in 2011 with Amanda Booth. 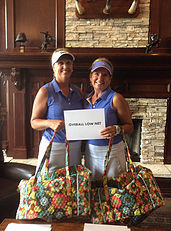 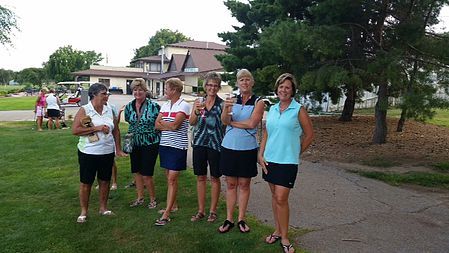