When playing in Wednesday Sweeps or Weekend Tournaments, Men’s Club local rules allow use of marked dropping zones on holes 7, 8, and 17.  These drop areas are EXTRA OPTIONS when taking penalty relief for a ball in a penalty area.

Under the rules, a player normally has three options to take relief for a ball in a red penalty area (see Rule 17).  Each of these relief options can be used with a one-stroke penalty.

1]      Stroke-and-Distance Relief.  Play again from where the previous stroke was made.

2]      Back-On-the-Line Relief.  Drop a ball on a reference line going straight back from the hole through the estimated point where the original ball last crossed edge of the penalty area.

The marked dropping zones (DZ’s) on holes 7, 8, and 17 should be considered “Option 4” for relief with a one-stroke penalty.

Note:  DZ’s used for Sweeps MAY BE DIFFERENT from those used for Weekend Tournaments.

When playing in Men’s Club Sweeps, you may use DZ’s marked for “public play” as shown below.

When playing in Men’s Club Weekend Tournaments, you must use only those DZ’s marked for “tournament play” as shown below. 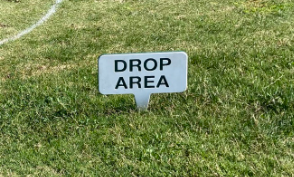 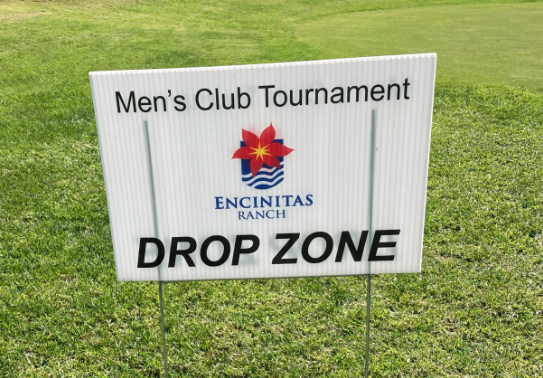